2020 has been a year like no other for online businesses. The weeks approaching the festive season have always seen a spike in shopping activity. But the necessity to rely more and more on online shopping this year has had an impact on the usual trends, for example the traffic around Black Friday and Cyber Monday. The way in which people shop for gifts has changed throughout the year, and consumers have quickly adapted to new routines for celebrating birthdays and holidays, which they will now apply to Christmas shopping.

To help you benchmark your online sales performance against your peers, Fresh Relevance has been looking at the impact of COVID-19 on 250+ of its clients in a variety of industries from the beginning of March to the end of November 2020.

Throughout 2020, average and median revenue across the whole Fresh Relevance client base consistently sat above pre-COVID levels. While there had been small spikes in average revenue earlier in the year, the end of November saw a significant increase in revenue, which interestingly peaked the week prior to Black Friday. This could be because businesses wasted no time in enticing shoppers to their site with festive deals this year, in order to remain competitive. It could also be due to consumer concerns that delivery times may increase and online demand for gifts may be higher this year. 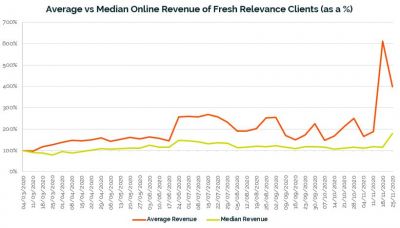 However, the median revenue only increased significantly during Black Friday week, which implies that for the majority of online businesses this was when they saw the most sales. Therefore, the week before there was a smaller proportion of businesses that saw revenues soar, which brought up the average.

The retail industry has consistently seen high revenue throughout 2020. Even between lockdowns consumers remained online to buy the goods and services they needed more of in a world of less restrictions. Unsurprisingly, revenue for the retail industry climbed throughout November, peaking during Black Friday week as retailers rolled out deals. We’ll break down which verticals within retail have been performing well both throughout 2020 as a whole, and also in the lead up to the holidays.

Other industries which have seen the same sharp increase in revenue after what has been a less consistent year are media and attractions/experiences. Despite entering another nationwide lockdown in the United Kingdom, and facing restrictions in other countries, consumers have still opted to purchase tickets to attractions or vouchers for experiences, a lot of which are likely to be gifts for loved ones at Christmas. This shows a renewed optimism in the market.

Travel revenue has remained low following its increase in the summer, as movement between countries is still restricted. A further breakdown of which types of travel have been most affected will be covered later.

Who is doing well in retail?

As you can see from the graph below detailing average versus median revenue impact, revenue has consistently stayed above pre-COVID levels in both regards. Comparing the shape of the two lines, however, tells us more about the nature of online shopping as a result of the pandemic.

The seemingly random spikes throughout the summer and autumn can actually be tied to a specific vertical seeing an increase in sales to reflect the situation as it was at that time. For example, when the first national lockdown was lifted in the UK, and similarly when schools returned, there was a significant spike in revenue for online fashion retailers and beauty retailers. 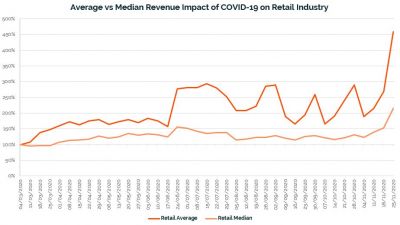 Once again, as is the case every year, there was a significant spike in revenue during Black Friday week, the most noticeable increase being for toys and games, which saw revenue rise to almost 2,500 per cent pre-COVID levels. The combination of the holidays looming and many families still spending more time at home than usual has been responsible for a standout year for the toys and games industry.

Other big holiday shopping winners were beauty, which peaked at 880 per cent usual revenue, and home and garden which peaked at 693 per cent revenue. Books/film, fashion, food/drink, health, sports/hobbies, and jewellery/luxury goods also saw their revenue climb above 400 per cent. Some of these verticals, such as fashion and books/film have seen more significant spikes in revenue throughout the year than they did during Black Friday week, which really highlights the unpredictability of consumer behaviour this year, and the impact the situation can have on spending habits.

Verticals such as automotive, DIY/construction, office supplies, pet supplies, and tobacco/vaping also saw a slight increase in sales at the end of November, but it was not as significant, as these verticals are not known for being synonymous with gifting. Insurance/finance has continued to see revenue on average sitting below a pre-COVID level. 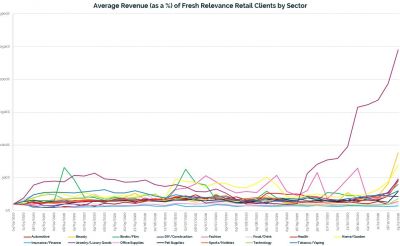 The graph below shows the average revenue for each vertical within retail from the beginning of March to the end of November, with 100 per cent being a normal pre-COVID level. It is only office supplies and insurance/finance who, on average, have had lower online revenue than they usually would. All other verticals have seen their revenue increase by at least 50 per cent, with the exception of automotive, as a result of social distancing and guidelines limiting the amount consumers that can visit the high street. 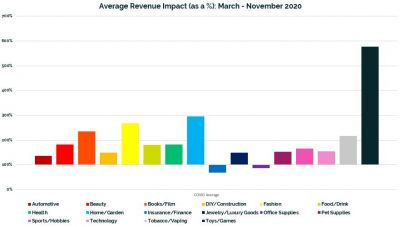 The impact on the travel industry

As with most of the data analysed, within travel there is a smaller proportion of businesses that perform significantly better and pull up the average revenue percentage when compared to the median figure, which better represents where the industry as a whole may be. However, it is clear that no matter which number you choose to benchmark against, the trend for travel has been consistent. 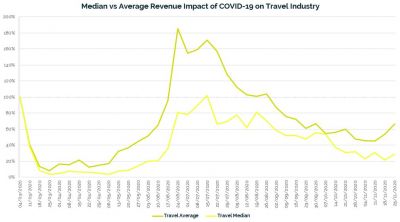 There was a sharp increase in the summer, as keen holidaymakers booked last minute trips as travel restrictions were lifted. As can be seen from the graph below, the majority of these bookings were for staycations or hotels, with overseas and coach travel also seeing an increase but not seeing revenue reach pre-COVID levels.

For the most part, travel continued to see revenue decrease slightly, albeit not reaching the levels it did during the first UK national lockdown. Revenue now seems to be leveling out, and there were some slight increases again for hotels and coach/cruise holidays, which hints at the possibility of another rush in bookings in the new year when vaccines and increased testing may make travel more of a possibility again. 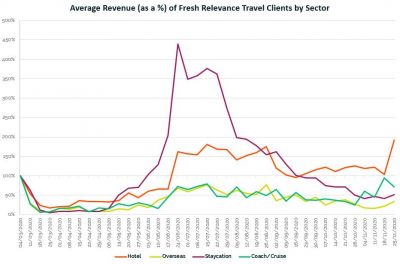 What does this data mean for marketers?

The most significant takeaways from this data are:

These numbers can act as a benchmark for your business.

One thing that has become undeniable throughout this year is the importance of having a good marketing strategy and martech stack to optimise the eCommerce side of your business.

Download Fresh Relevance’s eBook to find out what strategies, tactics, and tech to focus on in 2021 from 10 eCommerce marketing experts.